I love this little gentleman.

An elegant weapon for a more civilized age.

We were wandering the neighborhood to see light displays and ended up at Kerry Park’s iconic view.

Pike has learned to beg for chopped broccoli and kale so now any use of the cutting board summons him.

Nerd achievement unlocked. Kiddo asked me to solve his Rubik’s Cube. I merely followed the algorithm.

After almost three years without a vision checkup, found my nearsightedness increased slightly in one eye. Picked out some new frames in a different style, courtesy Queen Anne Eye Clinic.

Work Where You Want

For those of us in the “knowledge economy” we have the privilege of our work largely being decoupled from objects and places. Whether it’s coding, designing, writing, or any number of other activities that involve manipulating information, little more is required than ourselves, a computer, and an internet connection. This feature has been of particular value during the ongoing global pandemic as it has offered workers the opportunity to shape their lives as best as they can while dealing with extreme external stressors.

For those of you not immersed in the Apple blog-podcast-Twitter discourse, recently John Gruber doubled down on his take on remote work prompted by an internal Apple employee letter. I think John’s take is bad, and has prompted multiple rounds of valid criticism from a variety of sources. At points in both posts he refers to the leaked Apple employee statement as “self indulgent” or “passive-aggressive”, and I think in general fails to understand how much the last almost year and a half of remote work has obviously changed the way many Apple employees relate to work and home life. This is especially ironic coming from someone who has been a work-from-home member of the commentariat for well over a decade!

At this point I should do two things: disclaim that my opinions are my own and do not reflect those of my employer; and establish my own remote work bonafides. In addition to the current pandemic-induced work from home period, I worked remotely for the last two years in my previous job. In the former case my entire team is forced to work from home (with perhaps occasional brief periods in the office as needed); in the latter I was the odd one out but remained a part of a team with whom I had already established in-person relationships. I want to talk a little bit about the advantages of supporting people working where they want, when they want, as the nature of their work allows.

First and foremost for myself, both that previous remote stint and the crisis-induced work-from-home period have allowed me to spend more time with my family at critical periods of their day. Somewhat flexible hours and working from home have allowed me to be more present for everything from meals to bedtime to walking to school. Secondly, the elimination of a daily commute (at least one that exceeds walking down the hall!), even when trying to live in locations that minimize distance to an office, saves time that I can now dedicate to other pursuits, including cohosting a video game podcast with my friend Chris. Thirdly, with modern communication tools like chat apps and video calls, you don’t have to fight to book a conference room and there are whole categories of meetings that can be handled more easily with an asynchronous conversation or more quickly with a short call than gathering everyone in one big (and likely poorly ventilated) room. Finally, most large companies already have teams distributed all over the world, so they were already making use of tools that support remote work just to complete their regular in-office work. And these points don’t even consider the accessibility factors in how remote work allows fuller participation from disabled folks! (This is an area where Gruber seems particularly obtuse in his complaint that anyone disagreeing with the original letter must be against inclusivity; including disability means accommodations like remote work.)

Fully remote work is not entirely without its disadvantages; however I think most of these problems have mitigations, if a team works to establish those mechanisms. In the last year-plus of remote work I have run into only three major issues: onboarding new hires into the team culture; some team members overworking; and certain kinds of technical discussion. All of these are more of a problem in an organization that is not natively remote, where habits around this kind of work are lacking. For the first, I think it’s a combination of some natural human tendencies to want to get to know people face-to-face as well as how you structure impromptu encounters between experienced team members and new hires. These don’t require an office, but unless you structure your team thoughtfully, it can be challenging to bring new folks into the fold. For the second, when work is reachable from everywhere, it’s all too easy to never stop working. I try to make clear to people on my team that they should establish clear boundaries and use tools at hand (such as calendar blockers and notification settings) to separate work time from other time. (This is something that is easier said than done; Slack on my phone is dangerous!) For the third, as a technical lead on my team, the thing I miss the most is being able to overhear (and jump into!) some informal technical discussions. Right now some of those might be happening in direct messages or other chat channels I’m not in, in which case I might miss out on giving some critical feedback until a later review when it’s a bit too late.

All of these problems are solvable with a fully remote or hybrid team. You can establish a mentorship system with onboarding guides to welcome new members to the team; you can schedule regular virtual team events that help build those critical trust relationships; you can agree upon team standards for core hours; you can configure your devices to not inject work into your non-work times; you you can have conversations in the right channels where stakeholders have an opportunity to comment and arrest a problematic solution before it goes too far; you can share your musings in documents and channels where team members of all levels can comment on them.

To get back to my criticism of John’s thoughts specifically: he puts a lot of emphasis on gathering everyone together in Apple Park, which is no doubt an architectural wonder. As a would-be urbanist (who happens to normally work in a downtown office) I think Apple has made a mistake in creating this suburban monument and expecting so many of their employees to physically commute there. While a beautiful space, that kind of daily routine sacrifices time that be can better used for other activities with limited advantages on any given typical day in the office. “Onsite” or “office centric” culture misunderstands what most modern knowledge workers value, and Gruber demonstrates his worst impulses in in repeatedly stating that employees just need to get in line with a executive-driven return to normal that fails to value their unique and diverse lives.

In short, a company or a team that wants to hire the best people to solve their complex problems must support a wide variety of work arrangements, including fully remote work. Let your employees work where and how they want to.

Joining Team Pfizer. Found an appointment at a random Safeway down in Kent now that Washington is in Phase 3. Second dose scheduled! 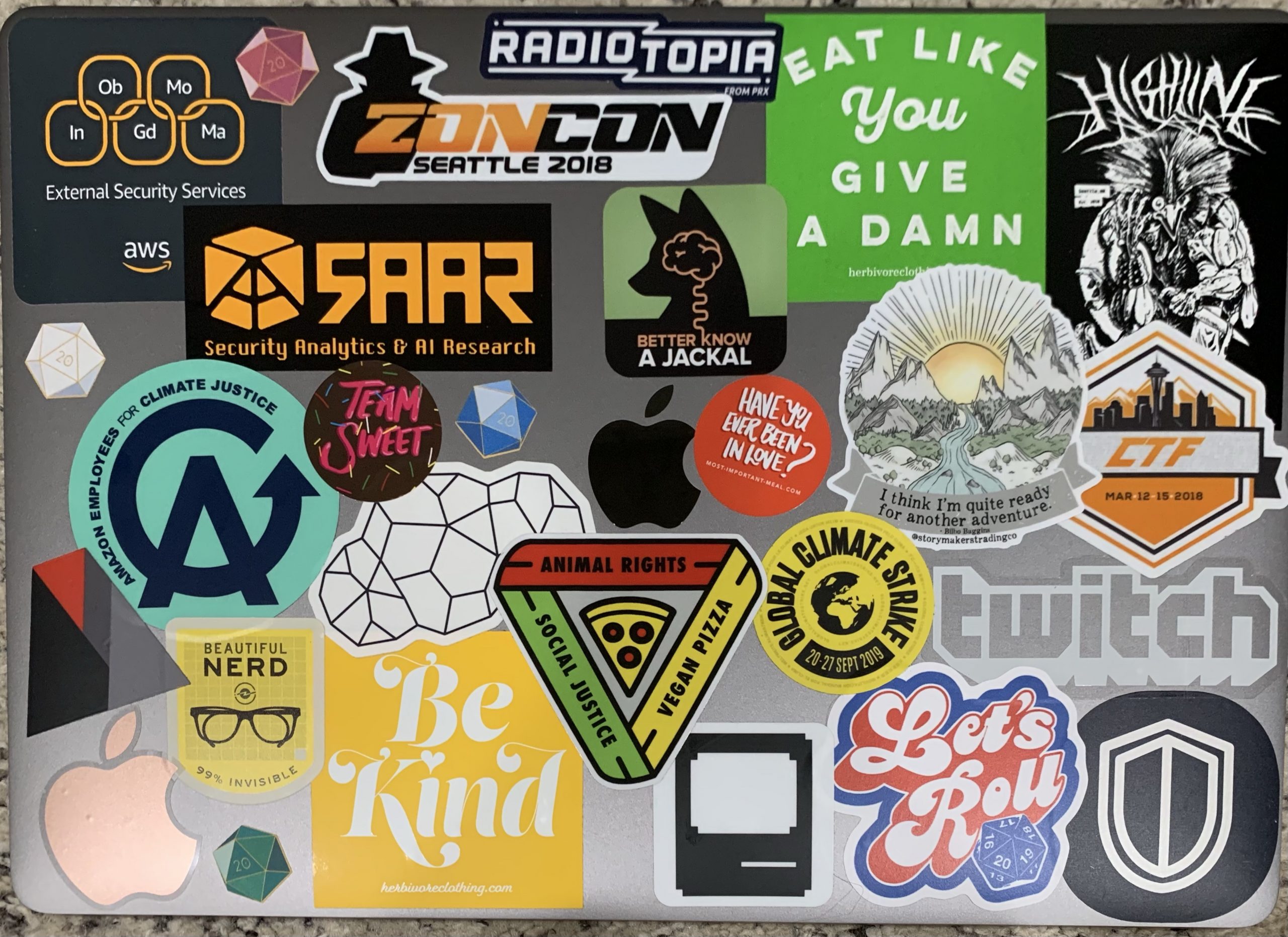 Finally got around to organizing my sticker collection that’s been accumulating for a few years and applying them to my newer work-issued 16″ MacBook Pro.

Compared to my previous 2015 13″ MacBook Pro, the stickers are much less work-oriented. The main vibes are podcasts and veganism. Here’s the key of what all these stickers are:

A good long overdue weekend project. Of course no one at work will be seeing these across a conference table for many more months! 💉